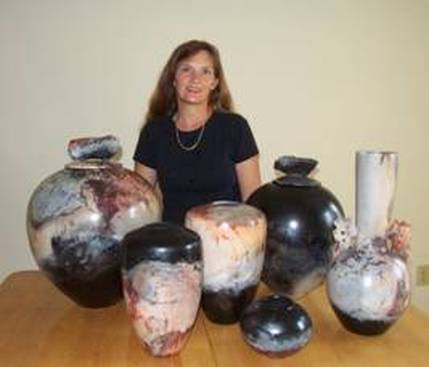 ​Debra Manfree has been sharing her love of clay with students for the past 20 years. She has introduced thousands of children to the world of ceramics with spin-a-pot workshops, pottery kits and interactive mosaic residencies. She has also instructed advanced students at the Herron School of Art in downtown Indianapolis. Her work as an independent professional artist includes fine ceramics created using Japanese Raku, pit-fire, earthenware and salt-fire techniques.

Attending school in the San Francisco Bay Area she was influenced by the cultural and artistic climate of the late 1960s and early 1970s. Her interest in pottery started while attending high school ceramics classes and has led to a lifetime of working with clay. She explains, “I was part of a group of students that took on the challenge of learning to be potters. I spent most of my spare time in the ceramics lab throwing as much as I could. We each built our own kilns and exhibited our work at shows. There were field trips to visit the Museum of Modern Art in San Francisco, where I saw works by Arneson, Voulcus and Gilhooley and many others who changed the form of ceramic art. Each spring local students would gather for a weekend of firing pots on the beach. We would build wood fire kilns and dig huge pits in the sand for pit-fires.”

After high school Debra continued working in her studio and took ceramics classes at College of San Mateo, University of San Francisco and Napa Valley College. The curriculum at Napa Valley College included workshops with potters from all around the world and hands on experience building various types of kilns, including wood firing and salt firing. She started working as a production potter at Pat’s Pots a studio in Vallejo, California where she met Don Edwards. They made plans to have a pottery business of their own one day.  Debra later worked as a production potter for Old City Pottery on the quaint old Spanish plaza in downtown Sonoma, California. The shop sold functional stoneware produced by in-house potters that shoppers could observe from the sales floor. She enrolled at Sonoma State University and completed her degree in fine art. After graduating she worked for Norstad pottery in Richmond  throwing ceramic sinks and dinnerware. She continued her work as a production potter at Curry Studios in Sonoma, a business that shipped most of her work to Indianapolis. A short time later she and Don also moved to Indianapolis.

Once in Indianapolis Debra sold her pottery at art fairs and galleries and taught pottery classes for adults at the Indianapolis Art League. In 1992 she was invited to teach at Herron school of Art. She recalls, “The basement studio was small, but it was a great experience because the Pennsylvania Street location held so much history and so many famous artists have studied there.” After Debra taught two semesters Debra and Don decided it was time to open their own pottery school. They started with a shop on North College Avenue and named their business Clayworks Pottery. Clayworks offered classes for both children and adults in addition to providing mobile pottery workshops for children.  After five years they decided to change their business strategy by closing the shop and concentrating on traveling programs. In 2001 Debra was once again invited to teach for Herron School of Art which had recently opened new studios on Stadium Drive. She says, “It was a joy to work in these new large studios with such talented students.”

More recently Debra has served as a resident artist for several elementary schools making ceramic mosaics with the students. The mosaics are constructed with tiles that the children form and paint themselves giving them a unique memorable experience and creating a colorful work of art that incoming students will admire for many more years. Speaking of sharing the fun of ceramics with students and hand-crafting her own fine pottery she says, “It is my way of giving back the inspiration gained from all the great teachers I’ve learned from through the years. I’m grateful for the collectors of my work who have supported my way of life as a craftsperson.”